Spatial Attention and Motor Awareness in Altered Gravitational Environments (GRAVITO) is an R&D partnership project that is coordinated by the University of Turin (Italy) and its other partners include the Catholic University of Louvain (Belgium), the Medical University of South Carolina (USA) and Vastalla, which acts as technical director of the experiment.

The efficiency of human visuospatial and motor performance in microgravity is crucial to the success of long-term space station and interplanetary missions.  To assure maximum performance capabilities during spaceflight missions, the effects of microgravity on spatial and motor cognition need to be clarified. Attention over space enhances the ability to select relevant objects and to anticipate expected events. The ability to orient attention toward advantageous or threatening stimuli, requires the interaction between goal directed (i.e. voluntary) and stimulus driven (i.e. automatic) spatial attention (Posner et al., 1980; Ricci et al., 2012; Chica et al., 2014). Another crucial cognitive function, partially sharing its neuro-functional bases with spatial cognition, is motor awareness (i.e. conscious monitoring of motor performance). On Earth, healthy subjects are usually aware of their movements. However, under certain conditions, they may be not conscious of signals generated by their own motor programming, even when they act intentionally (Berti et al., 2005). For example, when healthy volunteers, are instructed to trace straight lines to reach a target, they are not aware of experimentally induced movement deviations, within certain degrees of trajectory perturbation (Fourneret & Jeannerod, 1998). To our knowledge, no previous studies have directly investigated the specific effects of microgravity on voluntary and automatic components of spatial attention and on awareness of motor control.

We propose to investigate how microgravity affects the different components of visuospatial attention and motor awareness, during Parabolic Flights (PF) using well-established experimental paradigms, never employed before in space research. We hypothesize that microgravity will differentially affect automatic and voluntary spatial attention and awareness of motor performance. Specifically, the increased weight of visual over vestibular and proprioceptive signals in microgravity is expected to abnormally boost automatic spatial orienting, while weakening voluntary attention. In addition, we expect that microgravity, decreases awareness of motor actions. Preliminary data are in line with our predictions.

TECHNICAL DESCRIPTION OF THE EXPERIMENT

In one of our two experiments, a modified version of Posner’s task (1980), the SPatial Orienting of Attention task (SPOA) task will be administered to human subjects. The influence of microgravity on motor awareness will be studied using a modified version of the Fourneret & Jeannerod (1998) task, the Conscious Monitoring of Motor Performance task (CMMP).  In both experiments, the participants’ responses and motor trajectories will be recorded.

During both tasks performance, participants wear a bracelet recording changes in Electrodermal Activity to control for changes in psychological stress and/or arousal.

APPLICATIONS OF THE RESEARCH

Considering the complexity and the high cost of spaceflight missions, PF constitutes an optimal and effective model to tackle specific effects of spaceflight on the brain and consequently on cognitive processes. Findings of this research will contribute to further our scientific knowledge on the basic influence of microgravity on neuro-cognitive functions underlying orienting of visuospatial attention and awareness of motor control that are crucial for optimal astronauts’ performance during spaceflight and are relevant to the success of long-term space station and interplanetary missions. A better understanding of how these cognitive functions operate in microgravity needs to be considered by future technologies to overcome design constraints in usability during man/machine interactions in Space environment (i.e. cislunar modules, Moon village, etc) and in similar harsh conditions on Earth. Finally, the outcomes of this project might have implications for the design of effective interventions in individuals with vestibular disorders (Clément and Ngo-Anh, 2013) or individuals who after a stroke suffered from disorder of spatial attention (Ricci et al., 2016) and/or motor awareness (Berti et al., 2005).

We have publishd an article in Open Access on npj Microgravity in July, 2021. Its title is “Zero gravity induced by parabolic flight enhances automatic capture and weakens voluntary maintenance of visuospatial attention“. 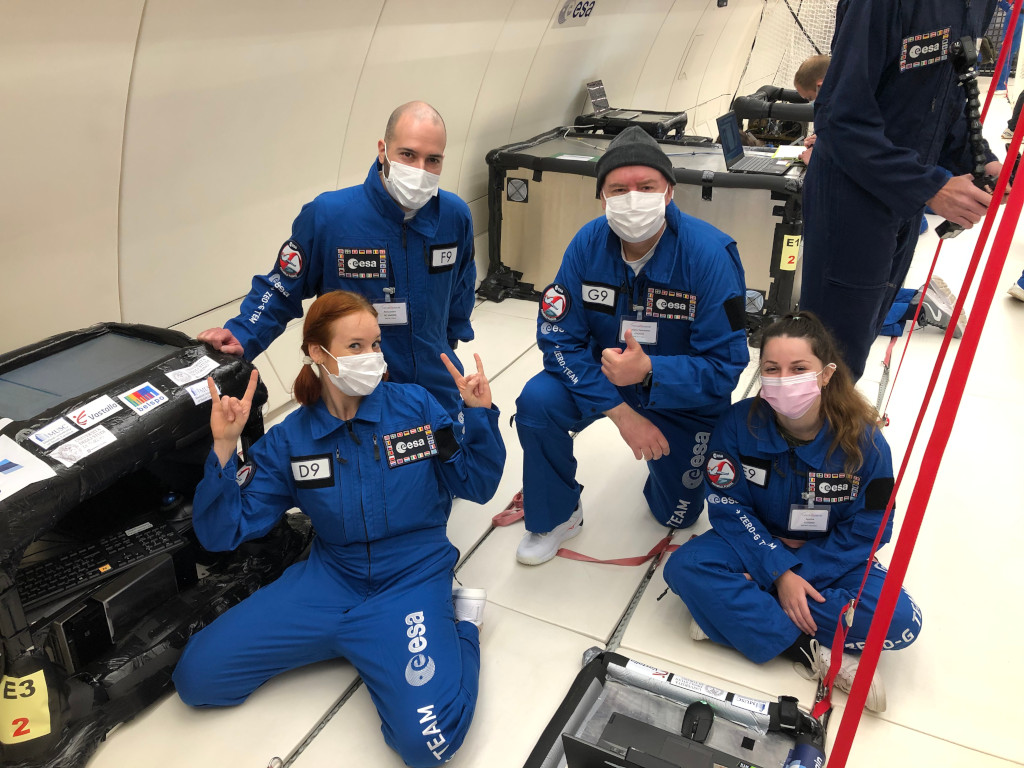